'Suffragette' in the spotlight

* Spoiler alert if you haven't seen this film!* 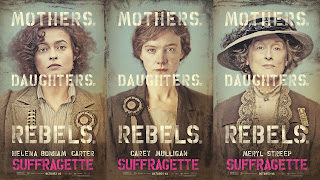 Bringing the women's suffrage movement to the pictures was always going to be a risk for stirring questions of historical accuracy. But, I see the film as a powerful portrayal capturing the brutality as women fought for the right to vote.

The film focuses on Maud Watts ( Carey Mulligan), one of a group of working class women faced with the multiple burdens of a patriarchal culture: violence and poor conditions at work coupled with having to answer to their partners at home. Far from glossing over class divisions in a nostalgic Downton style, we see the battle of satisfying everyday responsibilities alongside an increasing political consciousness towards women's rights. Drastic efforts allied to this activism are shown to lead to dignity being stripped away as the suffragettes are pushed to the ground by policemen and imprisoned, left in a even more vulnerable position. The audience can sympathise with Maud as her story of courage, hope and sacrifice unfolds, to the extent that her son is adopted by a family of higher class deemed fit. We are all drawn in by Maud's emotional plea to see her son as she undergoes an inspirational journey committed to challenging the status quo by any means, and watching everything crumble around her in the process.

An important narrative of Feminism is brought to our attention, one which is still relevant today in the midst of the likes of everyday sexism. Reports that it proved difficult to find a male cast for the film because the roles were supportive to the prominent female ensemble is rather ironic under the rhetoric of in/equality! I hope to be able to take a feminist approach in my own social research, to give voice to those groups of women still normatively and numerically marginalised, as I did previously when interviewing female farmers.

'Suffragette' may force any woman to reconsider her position in society whilst serving as a stark reminder not to take for granted the vote, a right so admirably fought for.

Have you watched 'Suffragette' yet? What did you think?
Labels: Gender