Negotiating Sociology at its Margins 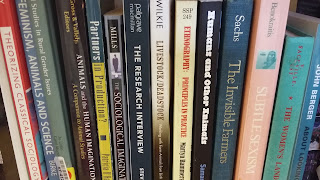 One of perils of being an early career academic is infiltrating established networks in your field. So, what if you can't easily place yourself and must navigate between the thresholds of marginal disciplines?


Human-Animal Relations...
During my masters, when asked the topic of my research,  I would start my answer with "it's a bit wacky but...", unknowingly reproducing the marginality I wanted to challenge. The research in question was about close relationships with pets and how they are expressed and managed long distance by university students. The stigma hit home when one participant cried during an interview and indicated it was refreshing to be able to talk about their pets openly. It was at this moment that I realised human-animal relations remained marginal in academia and social life. My current work crosses into the realms of Human/Animal Studies (HAS) by considering the influence of working with animals in the identity-making of farmers.


Rural Studies...
Another contested area is my academic interest in farming culture. Universities are usually located in cities and seem far removed from the issues of rural life. But, when you delve in, it becomes apparent that most people know a farmer. After all, farmers still play an important role in the economy as town folk rely on them for their food. It seems that we are obsessed with the industrial and the technological which stereotypically speaking, farming seems the antithesis of. But, far from this idealised view, farming practices and relations are affected by innovation too. Despite the rural imagination in pop culture, as in the likes of Countryfile, there is a lack of attention from interdisciplinary arenas about the contemporary nature of farmers' embodied experiences.

Opportunities
Negotiating sociology at its margins offers the opportunity to be creative and drawing upon multiple sub-fields can achieve something refreshing - contextualisation and complexity. From my previous research, I learnt that interacting with animals and space can play a big role in farmer's everyday lives which previous studies have not treated in much detail. The likes of 'walking interviews' takes these aspects into account and offers a more organic way of bridging the gap between theory and method than sociology is typically used to.  Borrowing methods and theoretical frameworks allows the tools for studying social life to be as messy as social life itself.

Challenges
The struggle in negotiating the sociology of human/animal relations and rural life comes in the form of how to position the identity of your work. In practical terms, when on the quest to build networks, long-standing concerns of sociological inquiry remain visible and making associations in the marginal fields of HAS and Rural Studies is difficult as they tend to cross into other areas, such as anthropology and geography. It seems that like the subject matter of sociology, the discipline itself reproduces hierarchies of value which positions some phenomena as more worthy than others. In turn, researchers are faced with the difficult task of striking a balance between authenticity and the will to 'get by' in a competitive system.